Lucy is a Werewolf 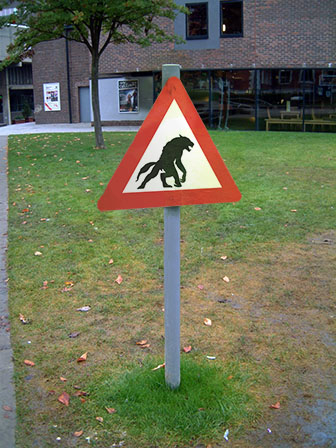 Lucy is a werewolf. She has long shaggy hair and pricked ears and big teeth. And then she turns into a werewolf. Ha, ha!

I think she hunts most nights around the full moon, but sometimes she just sits in with me and we eat chips and dips and watch old episodes of Weakest Link on her DVD player. Ann Robinson might also be a werewolf.

I asked Lucy why there aren’t other types of were-creatures, like were-hamsters or were-guinea pigs. Wouldn’t that be cool? We could keep them in school as pets, but not let the primary ones and twos look after them, in case they got bit.

I asked my dad if I could become a werewolf, but he said, “No, don’t be daft.” I don’t think he believes in werewolves, but I believe in Lucy. She’s my best friend, though she’s sometimes naughty. Like yesterday, she went hunting on a neighbouring farm and the farmer chased her with a gun. He was wearing pink wellies.

Then another day, I think she might have eaten Kensington, my neighbour Daphne’s pet cat. That could be a bit unfair. Lucy says she doesn’t think she did, but I did find Kensington’s cat medal wedged down the back of her mom’s sofa. Poor, pretty cat.

I think sometimes it must be hard to be a werewolf.

Tonight, after we’d done our homework, she couldn’t get out of the house. There was lots of whining and scratching, and my favourite program was on – Time Team, with a Special from York. I sighed a lot and had to go get the lead. Stupid Lucy, I thought.

We went round the block a couple of times and I let her off the lead, but only after I’d bopped her on the nose and told her not to go and bite anyone – except the crappy kids that live three doors up. They stole my trike when I was three.

Lucy slipped the lead for a while and came back smelling of pizza. I think she’d been rolling in garbage again. Worse when she rolls in poo.

I think looking after a werewolf is a big responsibility, just like dad said. He said, “You’ll have to look after her,” and that-was-that.

Handy, though, that I can go to school with her in the morning and she’s my best friend, especially for maths. She’s good at maths.